Skip to Main Content
It looks like you're using Internet Explorer 11 or older. This website works best with modern browsers such as the latest versions of Chrome, Firefox, Safari, and Edge. If you continue with this browser, you may see unexpected results.

EVENT: A Conversation with Jesse Washington

The UDC community is invited to join the Office of Student Success for a conversation with the Jesse Washington, the co-author of I Came as a Shadow, this year's selected common read. The book is the autobiography of Georgetown basketball coach and UDC alum, John Thompson. You can learn more about the book and it's authors in our online guide.

Jesse will discuss John Thompson's life, career, and enduring legacy in Washington, D.C. as well as his experiences working on the biography with him.

This virtual event is FREE and open to the UDC community. It will last approximately one hour and will include a Q&A from the audience. Advance registration is required.

A Conversation with Jesse Washington 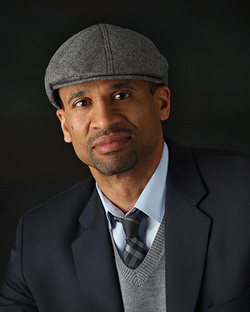 Jesse Washington was born in Brooklyn to an artist father and social worker mother. His family moved to Poughkeepsie, NY, when he was in grade school, and he began his career covering sports for The Poughkeepsie Journal the summer after his freshman year at Yale University. The next summer he returned to the Journal and switched to local news. He got his first front-page byline on his 19th birthday, on a story about Louis Farrakhan’s visit to the home of Tawana Brawley.

While in college, Jesse became a DJ, pledged Kappa Alpha Psi, and played on the basketball team. He also worked for Business Week magazine, the Hartford Courant, The New York Times, and completed a summer internship with The Associated Press. He started a reporting job in AP’s Detroit bureau after graduating from Yale in 1992. A year later, Jesse transferred to AP’s national editing desk in New York City. In 1996, he became assistant bureau chief for New York City.

At the end of 1996, Jesse left AP to become managing editor of Vibe magazine. In 1998, he was named founding editor-in-chief of Blaze, a Vibe spinoff and the biggest music magazine launch ever. In the premiere issue, Jesse made news with an editorial describing how the artist Wyclef Jean threatened him with a gun over a negative album review, which Wyclef denied. Jesse was hospitalized after another confrontation with a rapper angered over his coverage. He was fired in 1998 after a dispute with the owner of the magazine, who refused to publish Jesse's editorial about the acquittal of his friend in a high-profile Manhattan murder case.

Next, Jesse started a company with his father that published two coffee-table books, on the black artists Romare Bearden and Elizabeth Catlett. He co-founded the street basketball magazine Bounce and wrote eight cover stories for the Houston Press. In 2003, Jesse returned to the AP as Entertainment Editor, supervising a team in New York and Los Angeles covering film, television, music and celebrities. He made news in that position due to an experimental story describing how AP tried not to publish anything about Paris Hilton for one week, and again when news leaked that AP had prepared an obituary for Britany Spears.

Jesse's novel, Black Will Shoot was published in 2008. Later that year — three months before the election of the first black president — he began covering race for AP. Since 2015, Jesse has been a senior writer for ESPN's The Undefeated, a platform for exploring the intersections of race, sports, and culture. He is co-author of the autobiography of former Georgetown basketball coach John Thompson, I Came As A Shadow, published in 2020 by Henry Holt. Jesse has won a National Journalism Award from the Asian-American Journalists Association, Journalist of the Year award from the Philadelphia Association of Black Journalists, two feature awards from the National Association of Black Journalists, and a 2019 Associated Press Sports Editors Top 10 award for column writing.

Jesse is married with four children and a member of the Baha'i Faith. You can find him giving folks the business on a basketball court near you.

Enter your e-mail address to receive notifications of new posts by e-mail.